Better than the Mediterranean?

Lake Garda is a fresh water lake 50km long and 30km wide at its south end. Malcesine is a largely unspoilt town with many tourist attractions and Lake Garda is a clean, safe, fresh water paradise for all activity sports and relaxing holidays. The lake (it can feel like a sea on the windiest days) is 5km wide at our sailing centre with many protected bays and places to explore.

Renowned for its two thermal winds, the ‘Ora’ and the ‘Peler’, Lake Garda offers conditions to suit every level of sailor or windsurfer.

Learn more about the lake

First choice for windsurfers and sailors

Lake Garda is home to many current Olympic and professional sailors and windsurfers and past medal winners as well as being the frequent practice and regatta venue for major sport-boat classes, dinghies, catamarans windsurfers, kite-surfers and foiling boats of all descriptions.

The warm weather, clean water, long reaches and dependable winds attract all the major dinghy fleets for European and world championships, freestyle windsurf started here and the lake is perfect for slalom windsurf as well as for learning and blasting on 5km reaches. 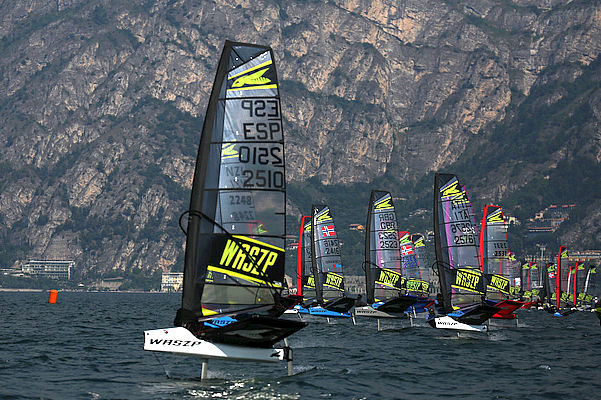 Unlike most other thermal locations, where the wind turns up on only a few summer afternoons, these winds blow throughout the year.

The morning wind, Il Peler, arrives from the North and starts at first light, blowing anything from Beaufort 4-6. Dinghy and catamaran sailors may want to reef for these conditions which can provide extremely exciting sailing while windsurfers will rush for their smallest sails and lightest boards.

After about 11am, the southerly breeze, L’Ora, starts up and by midday is ideal for beginners. L’Ora continues to build in strength into the afternoon reaching its peak of 3-5 Beaufort by about 4pm. This afternoon wind, with relatively flat water, provides perfect conditions to learn and practise all points of dinghy sailing, catamaran sailing and windsurfing. 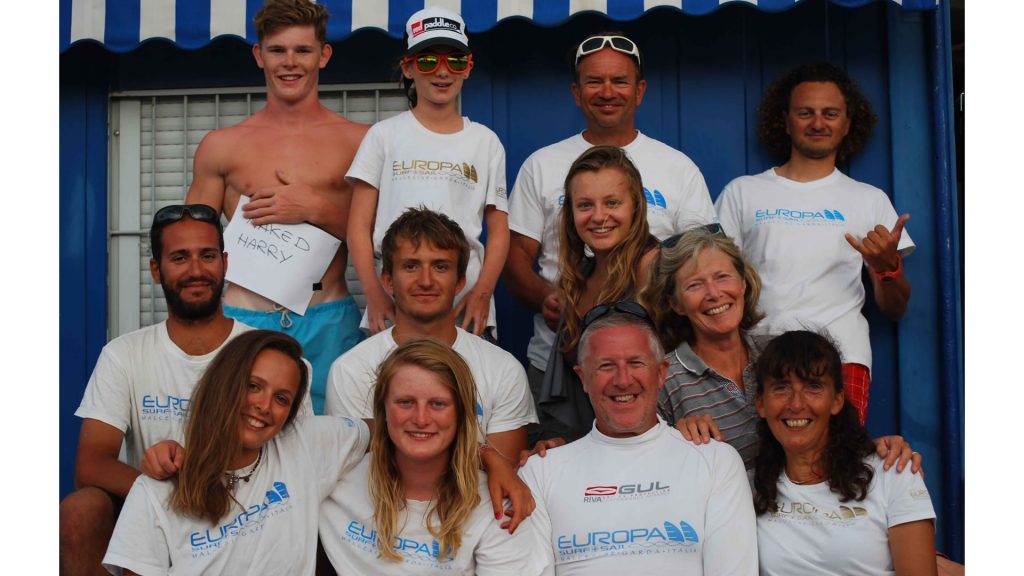 Want to be protected and comfortable? We can sell you a smart Europa Holidays rashvest (made by Gul) or a t-shirt to protect against the sun and wind while staying light and cool.

Europa Surf and Sail clients can use the full range of Gul wetsuits, shorty wetsuits and boots, all of which are cleaned and dried after each use. We can also provide you with gloves and trapeze harnesses, if required.

Summer air temperatures in this part of Italy vary between 24°c and 32°c with the breeze to keep it cool. Shorts, a rash vest and buoyancy aid are all that is required for sailing with the water temperature between 19°c and 24°c. In the early mornings a shortie is useful until the sun is fully up.

Air temperatures in spring and autumn vary between 16°c and 25°c with the wind often more pronounced in this period. A full wetsuit is required in the mornings with a shortie often being adequate for the rest of the day.

We have a safety boat on the water at all times with qualified boat drivers. This is particularly important for those sailing in morning winds who can be up to 3 miles away from the sailing centre and in the afternoon for those whose capsize recovery technique or water-starting skills are not fully developed.

We ask our clients to abide by our decisions and to refrain from sailing when the red flag is flying. In all cases, our objective is for our clients to have maximum fun, safely.

You must wear a buoyancy aid at all times (it is the law here) and we provide comfortable, buoyant, smart Gul buoyancy aids.

Getting around the lake

The via Gardesana runs along the east side of the lake from around Garda up to Torbole and Riva. The western road runs through tunnels past Limone and Sirmione down to Brescia but is quite slow to drive. It is the only way to Campione and to Tremosine on top of the mountains. The beautiful Val di Ledro above Riva is reached by following signs out of Riva.

The blue public transport bus runs along the via Gardesana, starting at Riva and going to either Verona or Peschiera. Check carefully on the timetables as the two destinations are 50km apart.

The local Tourist Bus (run by Ugolini) runs a loop from Malcesine going south to Cassone and then returning through Malcesine to take the Via Vecchia Navene, past the Alla Rama hotel and Speck Stube restaurant before rejoining the Via Gardesana at Campagnola, just before our sailing centre. After our centre the bus goes North to the Hotel Eden before returning to Malcesine for its next circuit (passing us again, going South).

There are many ferries, the larger two are the car ferry to Limone and ‘Battello’ which runs from Malcesine to Limone, then Riva, then Torbole and back along the route to Malcesine. Great for a day out, for a gentle shopping trip or for returning from Torbole with a bike (rather than cycling on the main road)

Quite rare and expensive. Avoid being trapped by windsurfing across the lake to Limone and then having to take a taxi the 50km round the lake to return to Navene.

Around Navene and to the South of Malcesine is a walking and cycle path along the lakeside. To go further means using the roads and we recommend using ferries and busses to visit the more distant towns if you don’t have access to a car.